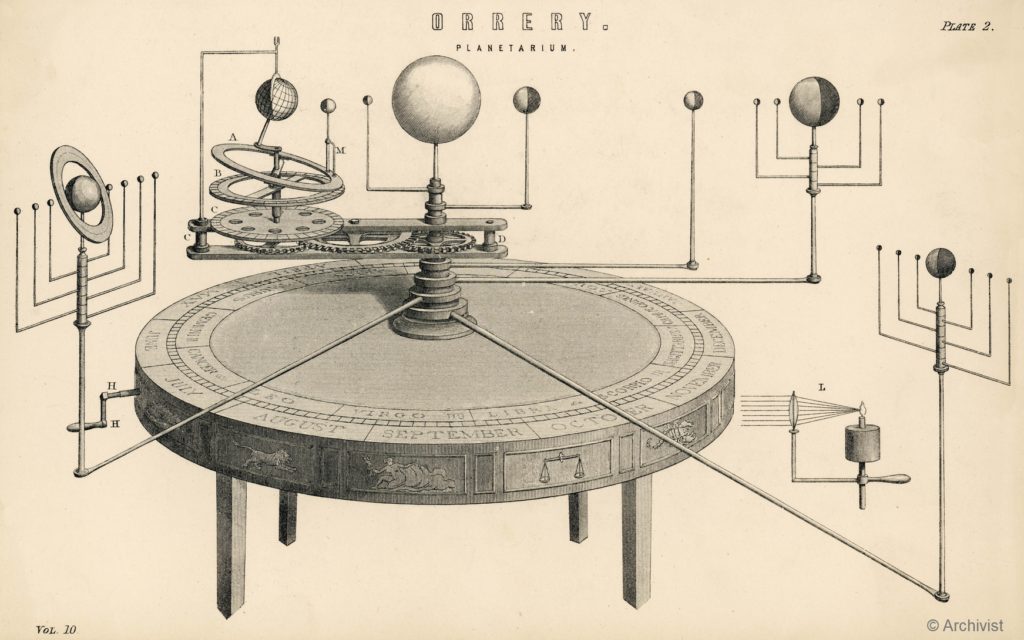 When he talked about imaginary numbers, how they’ve been integral to describing the nature of dark energy, this question came to me: What does it mean to say an imaginary number (the square root of negative one), a number that logically cannot exist, is somehow necessary to explain aspects of the universe? Is this false, like the gears and joints of an orrery, where the orrery itself successfully (though vaguely) describes some fundamental structure of the solar system, but the mechanics are only representative? A contrivance?

Wish I had a mathematician with a lot of patience. 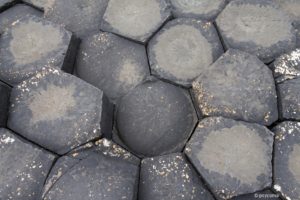 And another thing, for all its strengths, The Code loves to anthropomorphize – which scientists purportedly hate. The Code seems to imply an intent on the part of the universe to favor a particular numerical order, like the shape of a bee’s honeycomb or the Giant’s Causeway on the northern tip of Ulster. The truth – they must be skirting it to jazz things up – might have been more faithfully expressed if they’d said the universe has an entropic economy to it, and these numbers are the result of that efficiency. Which is still fascinating.

For example, the industriousness of bees, a behavior evolved over time (a higher ordered state), is channeled into the making of a honeycomb (a higher ordered state), where each of their efficiently-made cylinders become crunched into ‘sides’ around the tube by an equitable distribution of pressure from the other tubes, a maximum number of touching tubes. This pressure fills in the gaps and collapses them into hexagons (a lower ordered state). This funneling of energy can occur slowly over time such as when the heat and pressure in the earth’s crust make diamonds or the Giant’s Causeway, or as mentioned, the ongoing evolution of bee behavior itself. Channeled or directed energy can overwhelm the drive towards entropy, sure, but only until the energy becomes sufficiently diffused: for instance, when the structure that ‘directs’ the flow collapses – such as when the bees themselves die out or the earth cools down. But even before the end, actually throughout a system’s life, this directed energy will always be, at the very least, shaped by its drive towards entropy.

Here’s another way of putting it: the greater the efficiency of the system, the less energy it will require to maintain its order. It’s this interplay, I feel, that forces that shape, like symmetry, and what we identify as order.

And that makes me wonder — though being less hardwired leaves us vital room for adaptation — whether we humans are ultimately disordered in our behavior. Unlike bees. We push too reactively, often rashly, against this natural drive towards entropy. We must find a compromise, because The Code may ultimately be right, there may be an economical interplay to the universe. I have to wonder if technologically advanced civilizations that develop more slowly over longer periods of time – and more harmoniously with their environment – are in fact the only ones likely to be even remotely enduring. Seems to me, sociological and technological progression is likely to have the same economy to it – there will be forces, constraints, that impose something that looks like order… like the bees’ hexagons. By slowly pushing against the natural tendency towards disorder, and then incorporating it (resource management) instead of merely diverting the entropy (the behavior of consumptive, throw-away societies) – slower, more plodding civilizations might be able to hover at an advanced stage for a much longer period of time, and in the final accounting, advance much further…

But never mind all that. What are we, really? Death-defying glory-seekers, that’s what — and we simply will not slow down. The more fuel sources and other types of structured energy we funnel into our endeavors (but please, please, for the love of all that’s holy, let’s latch onto something other than fossil fuels, something that doesn’t generate poison by the barrelful), the more monumental and gloriously massive the crystallized membrane of our accomplishments. And yet, though awe-inspiring they may be, Ozymandias, they will almost certainly be more flawed… more brittle… unbalanced.

But let’s keep going! Let’s keep at it! Because this is how we were made. This is who we are.

…. Uh-huh. What a journey this has been this morning. But that’s what I was thinking. I’ll go make a nice cup of tea now.

2 Replies to “Hexagons, Death, and Tea”