It was a bone-cold morning, and Ruthie Capella felt life was simply too cruel. It had stolen from her yet another decent night’s sleep. She pulled at the railing in the subway car, hardly remembering how she got there, and sank into the hard, orange plastic of the last available seat. The moist air carried an odor of musty coats and breakfast pulled from pockets, and Ruthie’s head lolled with the rhythm of the train. Sleepy murmurs rose and fell as if floating on a gently swelling sea.

She dozed off until a passenger sidling past mashed her toes. She yawned and stretched as best she could in the cramped space.

Two women in suits stood close by, holding onto the same pole. Obsessed with other women’s hair, Ruthie saw that the tall one styled hers in a sleek knot. Ruthie’s own frizzed hair had never pleased her much, even when the red was natural. She patted it down, still a bit groggy—the kinkiness seemed tight today, maybe due to the damp.

The short woman wore a pretty blue blouse with her suit and tottered atop four-inch heels. She tapped the pole with her nails, each tap sounding the tiniest dull clang above the ratchety background whir. The train’s next turn swung the woman toward Ruthie, whom her tall friend had already been eyeing. Ruthie flushed from all the attention and, bowing her frizzy head, focused on the mud swirls along the floor.

“Well?” said what must have been the tall woman. “Are you going to let her have that seat, or what?”

Ruthie’s head snapped up. She looked at them both, wondering what they meant.

“Just drop it,” mouthed the short one.

If she was going to have to give up her seat, Ruthie decided, then she’d do it with dignity, though she was not exactly sure why she owed her seat to such prissy young things. But the train lurched while she tried to stand and threw her to her feet. Embarrassed, she clung to a pole with one pudgy hand and massaged her sore chest with the other. “I like to wear heels, too, you know,” she mumbled, thrusting out her chin, “just not so froufrou high.” The beasts. But when she glanced down at her own feet, she found she had not worn heels that day.

Still dazed from lack of sleep, Ruthie entered The Weston Building through the revolving door and headed to the elevators. Hassid from Accounting stood waiting. The red ‘up’ button was already lit.

“Top o’ the mornin’, Bob,” Hassid said in a terrible mock-Irish, doffing an imaginary hat. “Ready for the long weekend?”

Bob? Is he calling me fat!? Her coat was starting to feel snug.

The elevator dinged, and the doors slid open. Hassid held them open for her, but Ruthie didn’t enter and instead rocked on the balls of her feet while tugging at her coat hem.

She pressed her thin lips together and glared at him. To wait for the next ride was simply unacceptable, she decided, so she marched in anyway, but she certainly wasn’t speaking to Hassid if he was going to be so rude.

Rolling his eyes, Hassid let go of the doors, and the elevator shot upward. As the elevator rose, Ruthie pouted at all the unfairness of the world. The universe was always conspiring against her, and in a million niggling ways, life was cruel—but the hazy squat image in the brushed metal door never did tell her why.

The elevator doors dinged open onto a fluorescent-lit room packed with cubicles, and Ruthie and Hassid split ways without further comment.

Once at her cubicle, Ruthie dropped heavily into her chair and yanked the mouse to wake her computer. She squinted at her to-do list while pulling off her coat.

After several minutes, a man’s voice boomed into her cubicle: “Hey, you! Get outta there!”

Startled, Ruthie looked up in time to glimpse her supervisor passing with his coffee mug in hand. She rolled her chair to the cubicle door and peered down the aisle. Her boss stopped at Sonja’s work station a few cubicles away, and several people had already gathered there, including Martha, the rail-thin receptionist, who to Ruthie’s way of thinking had never really showed her proper respect. Martha’s voice was the easiest to identify; alarmingly shrill, it sailed down the aisle like the cry of a gull in a salt-splatter wind.

“Oh, come off it! It was going to be at least one of ‘em before the year was out,” Ruthie heard Martha say.

And there was Keisha lumbering down the aisle toward them, too, her skirt swishing with each step in those worn-flat shoes.

But Ruthie rolled back to her desk and began slamming old printouts together. What on earth was that Martha carrying on about?

Nobody thought to come tell me. Why am I not surprised? What’s another slight when there are so many?

Retirement’s not too far off, anyway. Pouting again, she scrolled through her email too fast to read them.

“I mean, she was a batty old lady, no lie. And always had to be smack dab in the middle of everything, you know? But she was really sweet, too,” Sonja said between sobs, and Ruthie knew, once Sonja had turned on the faucet, it’d take her forever to turn it off. Ruthie imagined Sonja dabbing her eyes with a mascara-drenched Kleenex.

“I’m just gonna go ahead and say it: I have never in my life met such a gloom-doom prophet,” said Keisha in her full yet trailing voice. “But I’m sure you’re right, Sonja. Besides, like my preacher always says, best not to speak ill of the dead.”

They need me over there, Ruthie thought, tsk-tsking, wondering who had died, and mentally thumbing through her list. “Death is merely a transition,” she always said, though she did like to splash on a little mystique, now and then. Those prissy things and their fear. After all, her heart condition, as severe as it was, meant she could keel-over at any moment, and she had been bravely sharing this news with all who would listen for over a year—to teach them, she told herself, to show them they had nothing to be afraid of.

Ruthie massaged her sore chest. Really, indigestion on top of everything else was a bit much.

“Knowing your time’s up—and I mean for a scientific fact—well! I’m tellin’ you folks, you sure get to thinking,” she’d say—and suggest they each do the same.

For these reasons and more, Ruthie knew she was better suited than anyone to impart the right sort of wisdom on an occasion like this—not Keisha, that cow, and certainly not fluff-headed Martha. During their sessions, even when Ruthie was short on cash, Mistress Marguerite was always stressing how Ruthie was special and so spiritually tenacious and liked to shower her with powerful tinctures and prayers, often for free, so it was a right shame everybody was leaving her out.

Such a tragedy, the office losing one of its own.

But this was ridiculous, wasn’t it? We’re family, for Christ’s sake!

She stood up and jiggled her pocket where she normally kept the crystals… but the pocket was empty.

No matter! I’m sure they’re home safe with Mittens.

She ran though her favorite lines a couple of times and was starting to feel like her old self for the first time that day.

Brimming to burst, Ruthie could hold herself back no longer. She shoved her chair aside and marched straight down the aisle. And she knew she’d better hurry—she wanted to get there before the crowd scattered, constipated with all that unmanaged grief. Two seconds later, Ruthie popped her frizzy head in, grinning.

Oblivious to Ruthie, Martha was pressing her insight on the group:

“And I meant it, too. Wouldn’t it be bizarre? Both of them. At the same time. You know the guy, right? Duffy, from Accounting? Little guy, black curly hair, loves St. Patty’s Day? Well, he has the same heart thingamajig that did her in. Told me so the other day, back in the break room.” Craning in close, Martha whispered, “You’ll see. He’s gonna go next.”

“Shush, you!” Sonja said, her raccoon eyes darting to Ruthie, who was no longer grinning.

Ruthie blinked at them both.

“Sorry for what?” Ruthie said, deflated and confused. Even her own voice sounded strange. “What is wrong with you people?”

“You! Get yourself back to Accounting! Pronto!” her boss bellowed from somewhere close by and made Ruthie jump.

But what was truly startling was what she saw in Sonja’s window.

Ruthie fumbled with the cubicle wall and slipped backwards into the aisle.

Outside Sonja’s window, the sky had turned a splotchy rose. Even so, the tint made everything appear dark—so dark that the glass reflected everyone in the fluorescent-lit office, including Ruthie. To the others watching, she was someone who had become rather shamelessly enamored of her own reflection.

But those glassy eyes screaming back at her were not her own. It was not her face with that horrific dumbfounded expression. The hair on Ruthie’s head—it was black!

She tripped over her duck-paddle feet and fell into the cubicle behind her. Her thudding chest seized up tight, and an electrified jolt shot down her arm. As her body sagged and slumped, a green necktie she had never noticed before slid over her round, buttoned-down belly.

Sonja dropped to her knees to help, but Ruthie only sank lower. Ruthie’s vision dimmed, and from the darkness claiming her, she heard a collective sigh.

“Can you believe it?” said Sonja, wiping her nose with the back of her hand. “Bob’s dead.” 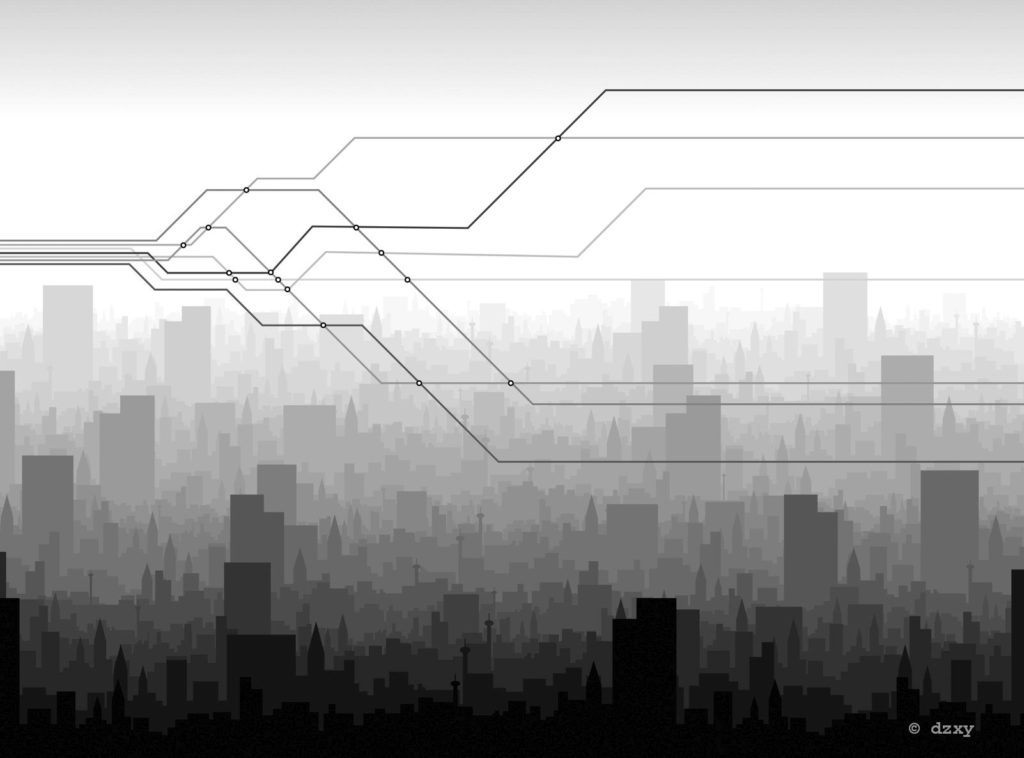 5 Replies to “The Delay at the Crossing”