As I’ve mentioned before, my opinions concerning what works for me as an author can’t help but be limited to my current stage of development. This is true of us all, no doubt, but sharing my thoughts with you today does make me a little uncomfortable.

Authors who preach too much remind me a little of myself at earlier stages, and may be a phase many of us must pass through as we sort out our competence. Still, listening to other authors can be educational, even when we don’t agree, if only to keep an open mind. I’ve disagreed with others at first only to change my mind vehemently later.

My present feeling is this: Do what works.

An author is a self-starter, and I’ve learned quite a lot from doing over the past few years. Cultivating a critical eye has been important, sure, but it’s not nearly enough, and sometimes–as others and I have come to discover–it can be a deterrent to doing.

However, it’s probably better that we minimize reliance on willpower to keep us going. From what I’ve read, we only have a limited daily supply. Encouragement is a big help, and a little sympathetic cattle-prodding is nice, too, but we certainly can’t rely on others to push us along.

But a determined budding author can force his own hand if he finds himself stumped:

For instance, as a student poet and English major in college, I’d done quite a lot of writing. I’d received praise and encouragement from professors and students alike. And yet, I was fast approaching graduation never having written a short story. I was too afraid, you see, to try writing one on my own and fail, but I still felt powerfully drawn to it. So I decided my strategy was to circumvent the fear by registering for a short story writing class. And I did. Twice. The same class. My advisor certainly balked, and the professor was relieved to learn why I was back and that it wasn’t because I was there to stalk him. But when I finished, I had several short stories under my belt and a lot less fear. 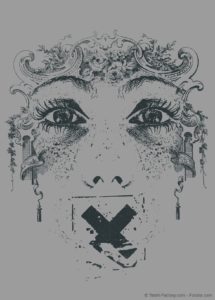 Today I’m addressing writing advice and attitudes I’ve come across over the years that either stumped me at an earlier stage or could have.

Don’t let them stump you.

Not likely. A draft is where we begin. For all of us. This was the toughest lesson for me. Early on, I was torn. Though I thought about it all the time, I was too proud to set my stories down on paper because they might come out flawed and then I’d have proof I couldn’t do it instead of the hopeful fantasy that maybe I could–and so I spent many years in this tortured state and didn’t do much writing, at least not the creative variety. Now, how was I supposed to grow without putting any work into it?

Don’t give up if your first drafts lack luster. If you’ve written a crappy draft, ask yourself, “Am I really interested in what I’m doing here?” If the answer is ‘yes,  yes, a thousand times yes,’ don’t give up. Take your time. Or begin again if your gut tells you to: You’re allowed to. You may have started out on the wrong foot.

Give yourself manageable chunks to focus on while editing, or try editing the entire draft in several sweeps. Think of the process as sculpting–that’s exactly how I see it. But if you’re just not that into what you’re working on, start something else. Be defiant. Cultivate resilience. Overall, your work will improve, I promise, whether you write a new story every week or rewrite just a few over a long period of time. In fact, there are costs and benefits to either approach, so you may find it helpful to switch between them. Whatever works for you is best–but competence is more relevant than talent, and competence requires effort.

Too many writers use too many words.

This I saw recently on Twitter, and it pissed me off. Yes, I’ve seen wordy, and I’ve been wordy. I agree that using fewer words tightens prose. How do I determine whether I’ve used too many? First off, I try to find the right words. An English teacher at my high school in the ‘80s used to stand in the hall and shout: “The apt word! Remember! Always use the apt word!”

What is the apt word? [sigh] While mulling over it just now, I couldn’t help noticing that ‘apt’ is shorter than ‘apposite’ or the more common ‘appropriate.’ For readability, short words are often the better choice. But what if a writer requires many short words to convey his point when a single sesquipedalian will do? Bottom line: Suitability is the key to finding the apt word. Suitability takes everything into account. Nobody wants a clunky read. With English, connotation is just as important as denotation. And let’s not forget rhythm–both adding and disrupting rhythm adds drama. This is art, folks. We aim to communicate compellingly. But it might be wise to try fewer and simpler words first and favor the ten-dollar variety only if necessary for clarity, tone, or to please the ear. I’ve erred both ways (usually only noticing once I’ve gone public). And another thing we might want to keep in mind: The longer we take to make our point, the more likely our reader will assume we haven’t convinced ourselves yet.

A true artist has to wait for inspiration.

I heard this again recently from a painter. She said it with total sincerity, assuming I would agree. But I don’t.

In my twenties, I might have agreed with her. Talking with the painter, I realized that maybe I still do feel this way to some extent about my poetry and drawing, but that’s because they’re so intensely personal to me—almost too personal, as in ‘me talking to me.’ My fiction, however, has always been intended as a way to communicate with others. It’s what I do now, and like any vocation, it requires a substantial investment of time and focus: I don’t dare wait around for the right mood.

However, I’ve learned that there are depths to moods, and even if a surface mood doesn’t feel fertile, an underlying mood might. If I put myself in the chair long enough for boredom to set in, my mind will start to work the problem, and so by regularly and mechanically placing myself where I need to be to write, the process has become more natural and habitual. The creative side wants to communicate with the greater world. The rational task-master may provide structure, but when given half a chance, the creative side has plenty to say.

Anne Rice loves this one—or rather, she hates it (see her statements on Facebook and Twitter). Folks, adverbs and adjectives are fundamental parts of the English language. Let’s use them! But… if there’s a more precise verb or noun that our reader will understand, that won’t choke our reader to say (out loud or in his head), and that better captures what our adverb or adjective adds, then let’s try it out. Yes, English loves redundancy, but we don’t want to be cloying. We can still use rhythm or rhetorical repetition, if we like, to slow the reader down and encourage him sit with our idea awhile. And maybe sometimes it does make sense to use less direct language if we want the reader to gloss over the point now because we plan to smack him with it later. But whatever we do, we should make sure the adverbs and adjectives enrich our message rather than diluting or deviating from it—this is the trick.

But you know what? Enrich first and tighten later. Save the worry for the editing stage.

Yes and no. Consider this: Alliteration adds a poetic, sing-song feel to the passage and will tend to lull the reader. Because it’s disarming, it can be used to great effect if we want to be ironic or if we have an unpleasant truth to share. But too much comes off childish and will detract from what we have to say. When in doubt, strike it out–but know that it can be a powerful tool and should remain available to us when we need it.

What’s this? Was it meant for tech writers?

We write fiction. It’s true that if we’re writing fantasy or science fiction, we have to be careful that our reader doesn’t mistake an analogy for a description of what is. Metaphors are especially problematic this way. However, I see similes used beautifully and effectively all the time.

Drawing analogies is what fiction writers do. This is how we stylize reality and expand perceptions. Use similes if they hone your message. This is art. And if you overdo it or get it wrong, forgive yourself. You’ll do better next time.

Never use a thesaurus.

Crazy. Use a thesaurus. I use Merriam-Webster’s unabridged dictionary and thesaurus all the time—most often for the simpler words. They usually have many meanings, and I like to make sure I’m saying what I intend. But as I said above (and what the editor who advised this likely meant), sometimes the words that have the most precise meanings are a misery to read. And some words carry nuances that really matter, so it doesn’t hurt to check usage if the word is new to you. A thesaurus is a tool like any other, and it takes a little practice to learn how to use it (which means you’ll get to make these mistakes a few times before you get it right, as I have and still do, from time to time).

These have been a few of my observations. Thank you for your time. Feel free to agree or disagree, of course.

4 Replies to “Taking It This Far: Author Insights #1”